Da Beebs: I don't know whether we have mentioned this in the past but our #1 grew up with no pets. She has always loved animals and desperately wanted a cat or dog when she was little, but her parents always said no, citing all sorts of excuses. In fact, the family as a whole was a bit of a pet desert. So, it's no surprise that #1's cousin, Ms. K, also grew up without any animals. What is more, she was told early on that she was (might be?) allergic to cats and dogs, so that was that. As she married and had her own daughters, they started asking for a pet and she automatically said no. And so the years passed. And then one day, someone told her about some kittens who needed a home and something shifted deep inside her. Almost without realising it, she said she was interested and then went home and asked the girls. They and their father looked at her with open mouths, but they jumped on the opportunity! And so what it was that a tiny little panther called Olive came to live with the family! 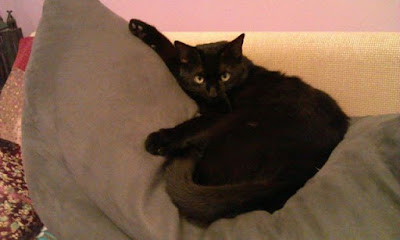 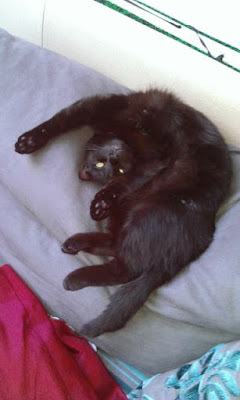 Well done, Miss Olive, for making yet another family into cat lovers! We are proud to have you as a cousin!