Sen-Chan: I'm in charge of posting today because Tom is back at the vet's yet again! He was doing great and really enjoyed the party last night but had a bit of a relapse in the night. Since we would all like him to be 100% functional again soon, #1 decided it would be better for him to go back for further examination. They found one more of those spikelets and suspect that Tom tried to get at it himself after the Elizabethan collar was taken off last night. Bad boy! He is staying over there under supervision until either this evening or tomorrow morning.

Anyway, it was a cool party! Tom was the star of the show and he played it for all he was worth. Here he is sneaking up on the birthday cakes: 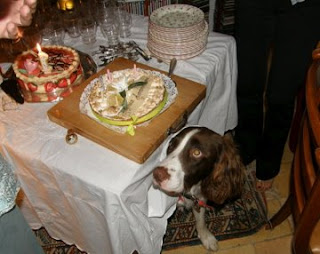 and here is a close-up of his cake: 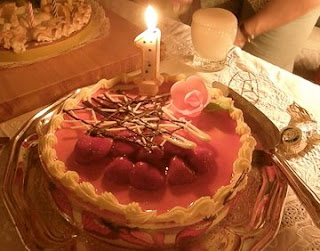 and him showing off his red bandana from Big Dogs: 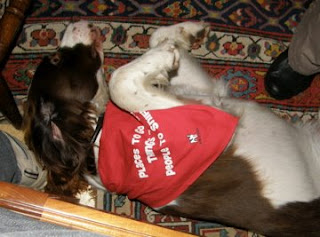 He got lots and lots of toys, in fact so many that he hasn't finished opening the packages yet! He'll have fun when he gets back from the vet's!

I had a fun evening too. Tom's friend, Pie, was there and she is totally devoted to me ("obsessed" is what #1 and Ms. A call it). So she spent all evening chasing after me so she could cover me in kisses...

Here she is trying to lure me down from my favourite radiator: 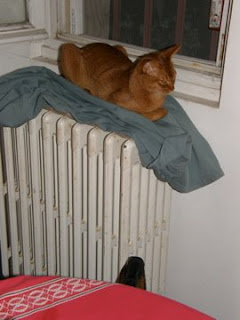 and even bugging me when I was trying to eat: 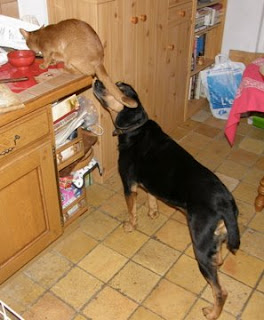 #1 and Ms. A get worried sometimes that she will be too rough and will hurt me, but I have her covered!

Oh, and #1 wanted to answer the inquiry from Angus Mhor as to why she is called #1. It's because she is the #1 person in my and Tom's lives!!! Of course we think she's the best, but that's another story.
Posted by Tama-Chan, Benny, Vidock, Violette, Ollie, Hotesse & Heloise at 13:09