Tama-Chan, Bibi-Chan, Gen-Chan, Vidock, Violette, Ollie
First, in June 2008, came a young sorrel Abyssinian cat called Sen-Chan and a slightly younger English Springer Spaniel called Tom. In October 2008, they were joined by Tama-Chan, a ruddy Abyssinian girl kitten. The three lived so happily together, playing and cuddling in the French countryside with their mistress, known as #1. But in early January 2009, tragedy struck and Sen-Chan went to the Bridge at not yet 18 months. For a while, it was just Tom and Tama-Chan and #1, remembering sweet and gentle Sen-Chan, and the one who came before him, the fierce and noble Ikkyu. But then, in April 2009, a little red furrball, Sei-Chan, joined the family! She was followed in October 2009 by Yuu-Chan, a playful but very mellow little sorrel boy. And then Tama-Chan had kittens and little Bibi, a ruddy male, stayed with us. Sadly, we lost our beloved Yuu-Chan in September 2010, but we soldier on and live and love in our little corner of rural France. And we now have a big little brother in Vidock, a Percheron stallion, a little little brother in Genji, a blue Abyssinian, and a big little sister in Violette, a Percheron mare.


On April 29th, 2017, in a beautiful field in the Perche area of France was born a very special Percheron filly! 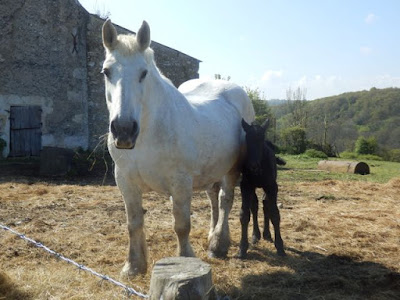 Her Mama, Hotesse, was a already 22 years old, which is a grand old age for a Percheron horse, so this was her last foal, and it was a girl! She was also a half-sister to Violette! 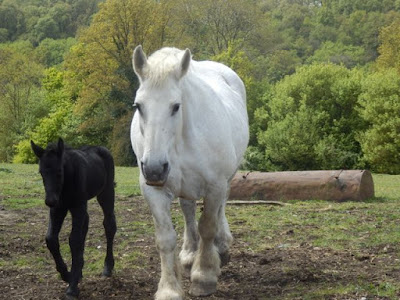 She was cute as a button! And her name was HELOISE! 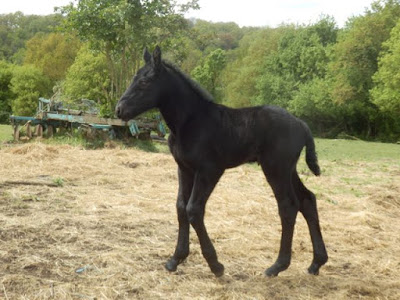 And mama Hotesse was a real pro at motherhood! 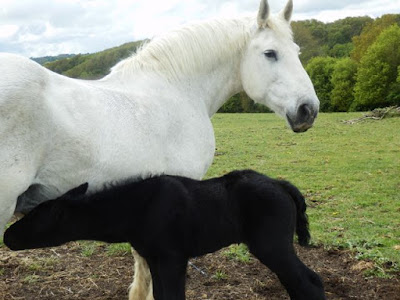 A few weeks later, they moved to another field, right next to Poupounette Central: 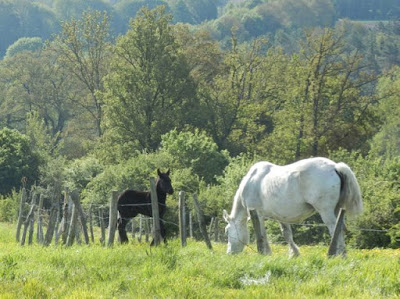 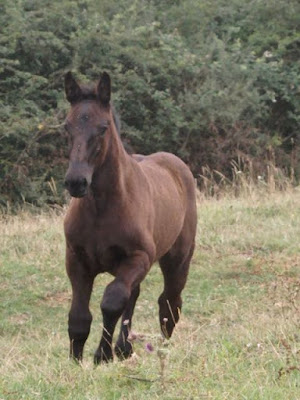 An she got into snuggling very young! 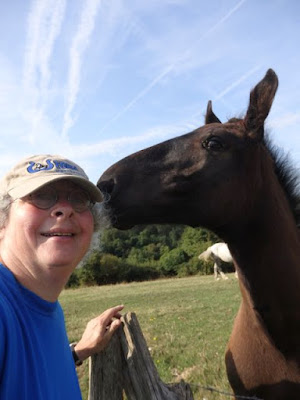 During her first year, she mostly lived with her Mama and with her older sister, Doucette: 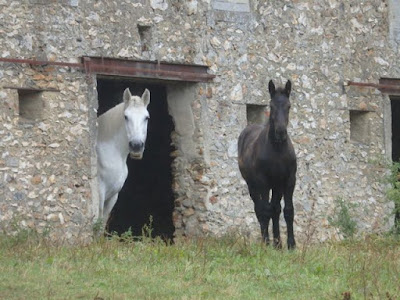 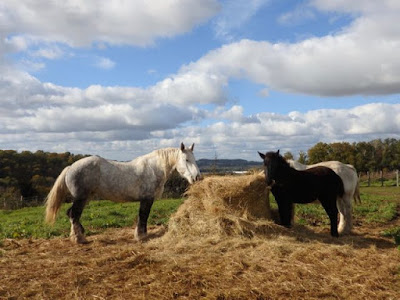 Heloise's Daddy (they say "sire" for horses) was a black champion stallion called Titus, and he passed his colouring on to his daughter: 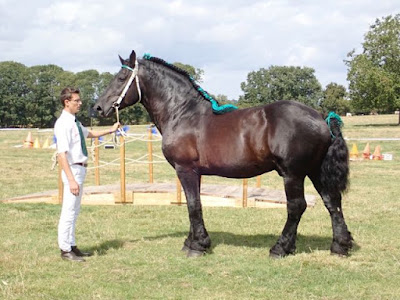 By the time she was a year old, Heloise had grown into a lovely young filly: 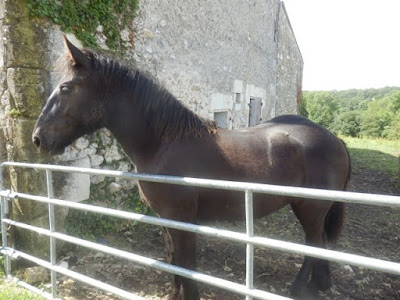 When she was 15 months old, she was sent to school at Ms. C's for a couple of months: 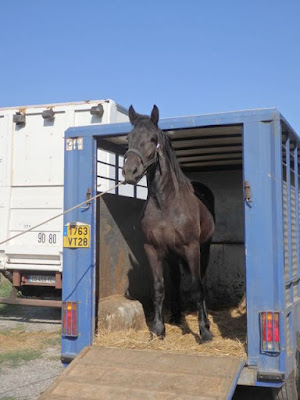 She learnt things like giving her feet for the farrier: 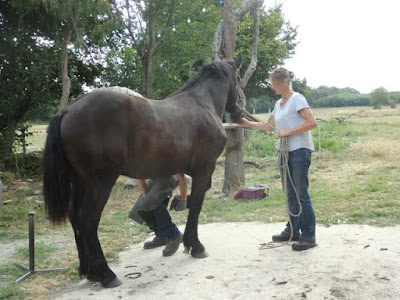 And was admired by all who saw her: 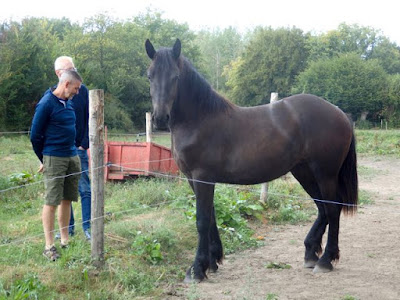 She was best friends with The Big V: 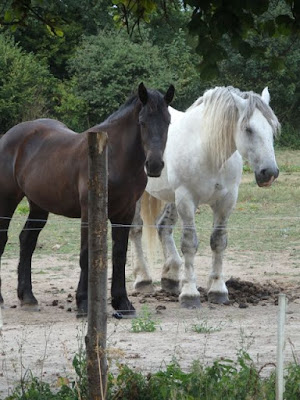 And took part in her first show: 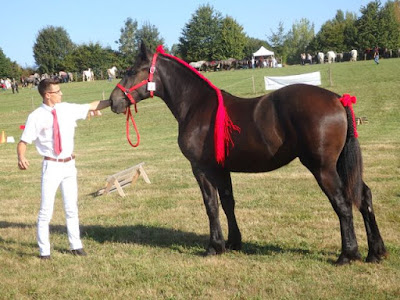 After that, she came back to her field next to Poupounette Central, and there she turned two: 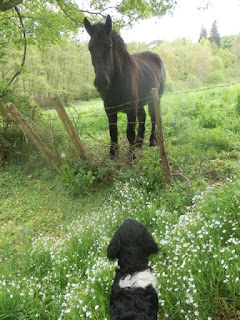 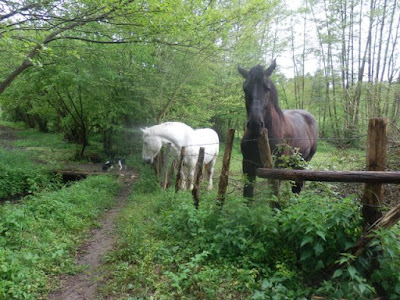 It was around that time that she declared to #1 that she wanted to move in with her... 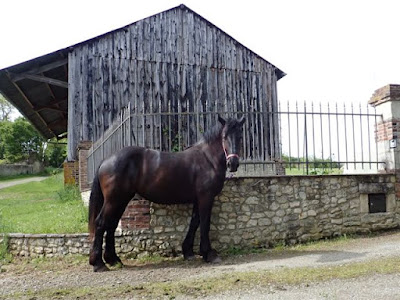 As autumn got under way, her future, and that of Mama Hotesse, increasingly became a concern. The owners had already sold off Doucette to a meat buyer in the spring, and the possibility that these two would end up in the same way was growing stronger. Something has to be done. That something was a Go Fund Me campaign to which so many kind people contributed, and which made it possible to purchase both mares after lengthy negotiations on price. On the 4th of March, the two mares were finally moved to Ms. C's. 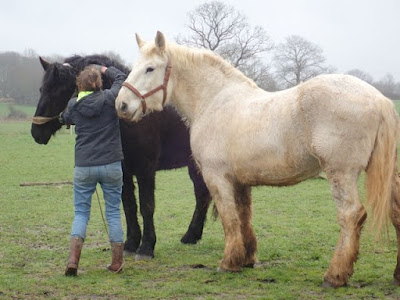 Less than two weeks after the move, France entered a period of strict confinement due to COVID19 an it became impossible to visit them until this past weekend.

And so, today, we celebrate Heloise's THIRD BIRTHDAY! She has grown into a fine mare. There are still question marks concerning her future, as the current crisis is seriously impact the revenue stream at Poupounette Central. The one thing that is sure is that she will always be well looked after and loved! 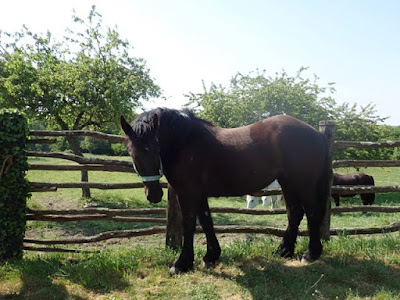