Tama-Chan, Bibi-Chan, Gen-Chan, Vidock, Violette, Ollie
First, in June 2008, came a young sorrel Abyssinian cat called Sen-Chan and a slightly younger English Springer Spaniel called Tom. In October 2008, they were joined by Tama-Chan, a ruddy Abyssinian girl kitten. The three lived so happily together, playing and cuddling in the French countryside with their mistress, known as #1. But in early January 2009, tragedy struck and Sen-Chan went to the Bridge at not yet 18 months. For a while, it was just Tom and Tama-Chan and #1, remembering sweet and gentle Sen-Chan, and the one who came before him, the fierce and noble Ikkyu. But then, in April 2009, a little red furrball, Sei-Chan, joined the family! She was followed in October 2009 by Yuu-Chan, a playful but very mellow little sorrel boy. And then Tama-Chan had kittens and little Bibi, a ruddy male, stayed with us. Sadly, we lost our beloved Yuu-Chan in September 2010, but we soldier on and live and love in our little corner of rural France. And we now have a big little brother in Vidock, a Percheron stallion, a little little brother in Genji, a blue Abyssinian, and a big little sister in Violette, a Percheron mare.


Tommy: Not only did #1 returned as planned on Monday but she has told us that she has no more long trips planned! She says she has really had it with leaving us (and with bizarre sitters) and she is staying put! Woo HOOOOOOO!

We have settled back into a routine here, except that it has been seriously HOT. Yesterday, the temperature climbed to 37°C which is around 99F! That kind of heat is very unusual for this neck of the woods. We are lucky in that our house is built into a slope so the downstairs stays pretty cool. Our study has trees protecting it from the worst of the heat, and we have a couple of electric fans running in there. The bedroom, however, is a bit of furnace but fortunately, it does cool down at night. We also have terracotta tile floors downstairs and they are pretty nice to lie on.

But I think you all know me well enough by now to realise that you can't keep a good Tommy down! So, I have still been having fun chasing after my ball in the fields, although #1 makes sure we don't stay out to long. 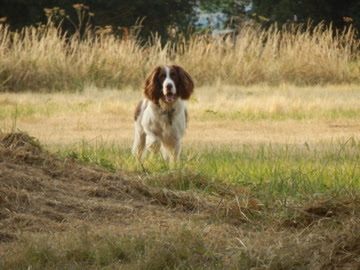 #1 trhows those balls better than anyone else! 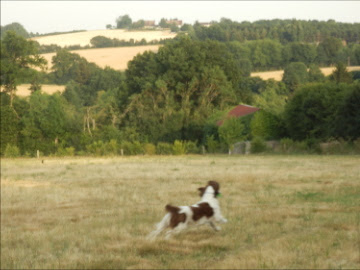 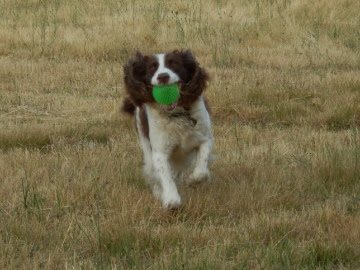 OK. I think I will have a little rest now: 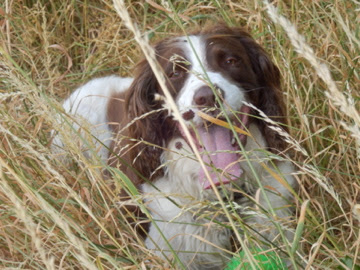 And, by the way, several of you have asked about Da Beebs. He is Da Happy Boy now that his #1 is back! No "incidents" so far.