#1: Well, gentle readers, yesterday was the big day when Sei-Chan was finally released into the rest of the house to meet her siblings and start settling in to her new life. So, late afternoon, she bade a sad farewell to her Mama, Viña del Mar: 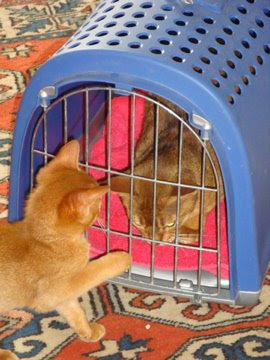 We temporarily put Tama-Chan in Tom's large Vari-Kennel, and put Tom outside, so that Sei-Chan could start to explore in peace. She was pretty spunky as she began to discover the big house: 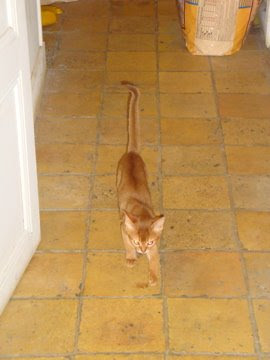 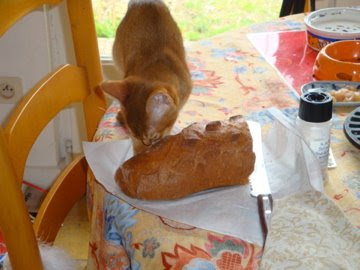 When we eventually released Tama-Chan, Sei-Chan seemed quite unphased by her, despite being hissed and growled at. She continued going about her explorations, all the while keeping an eye on Tama-Chan. Actually, it was Tom's arrival that proved to be more of an issue as Sei-Chan is totally unused to dogs and he is rather large. She ran for her life, finding refuge in the back room where she had been living the past 8 weeks.
Last night, on Uncle U's advice, I put Tama-Chan in the back room where the girls had been, and took Sei-Chan into bed with me. She cuddled in nicely and had a good night. This morning, we are seeing pretty much the standard meet and growl pattern. Tama-Chan is clearly fascinated by her but also a little scared. Remember that Tama spent over a week hissing, growling and screaming at Sen-Chan when she first arrived, even though he showed absolutely no aggressiveness towards her. As for Sei-Chan, she knows how to growl back and appears very intrepid. So, we have had some nice hell kitty moments: 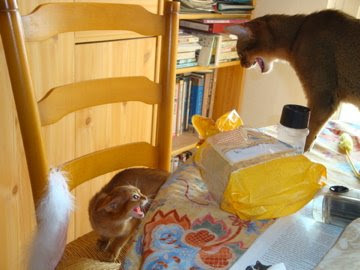 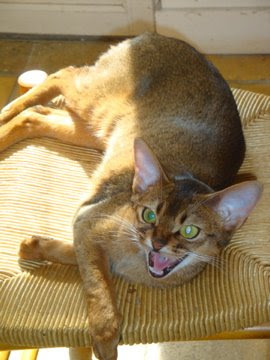 Tom, on the other hand, has been doing a great job at winning over Sei-Chan and she is already a lot less scared of him. He just sits perfectly still as she gets closer, so she can see he is no threat. 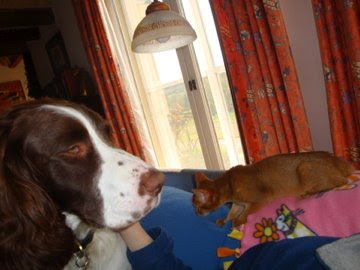 I am sure the next few days will see quite a bit of hissing between the two girls, but things seem to be going relatively well. We'll keep you posted!
A big thank you to all of you who have voted for Tama-Chan in Misha's Kitty Fight Club Quarter Final. The competition with Samson has been very, very tight and we will be needing even more votes to win this one! You have until Friday to vote.
Posted by Tama-Chan, Gen-Chan, Vidock, Violette, Ollie, Hotesse & Heloise at 11:12