From #1: It is with the heaviest of hearts that I have to tell you that my beloved SEN-CHAN (known as Poupounet) very unexpectedly went to the Bridge this afternoon.

He had lost his appetite the past 24 hours and my house-sitters took him to the vet this morning. She initially thought it might just be a gastric problem but the more tests she ran, the more worried she grew, until she ran the test that showed up positive for Feline Leukemia. She was considering options, such as a transfusion and treatment with Interferon when he went into massive cardiac arrest and just went out like a light.

I do not even know where to begin in telling you about him. He was the sweetest of cats, never ever scratching or biting, and always ready to dish out cuddles. He was very sickly to start with, and was unwell much of his life, but he grew big and strong and loved his outings in the field in the summer and autumn, his one excursion onto the roof and his tree-climbing. He was only 16 months old, but he made an enormous place for himself in my heart, and will always be with me. I know that both Tom and Tama-Chan will really miss him too.

Make good use of those wings, mon Poupounet! 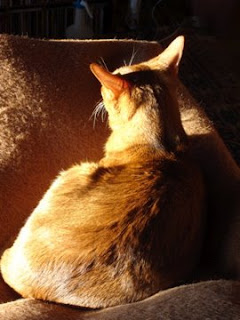